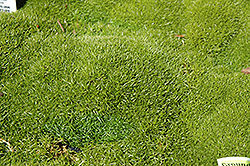 Impressive used as a border, groundcover, or rockery plant; a fine textured moss like appearance contrasts well with broad leafed plants; will tend to cling to rocks and crevices; an outstanding texture plant in the garden or containers

Two Flowered Knawel is primarily valued in the garden for its broadly spreading habit of growth. It features tiny green flowers with chartreuse calyces at the ends of the stems in late spring. Its attractive tiny grassy leaves remain green in colour throughout the year.

Two Flowered Knawel is a dense herbaceous evergreen perennial with a ground-hugging habit of growth. It brings an extremely fine and delicate texture to the garden composition and should be used to full effect.

Two Flowered Knawel is recommended for the following landscape applications;

Two Flowered Knawel will grow to be only 4 inches tall at maturity, with a spread of 3 feet. Its foliage tends to remain low and dense right to the ground. It grows at a medium rate, and under ideal conditions can be expected to live for approximately 15 years. As an evegreen perennial, this plant will typically keep its form and foliage year-round.

Two Flowered Knawel is a fine choice for the garden, but it is also a good selection for planting in outdoor pots and containers. Because of its spreading habit of growth, it is ideally suited for use as a 'spiller' in the 'spiller-thriller-filler' container combination; plant it near the edges where it can spill gracefully over the pot. Note that when growing plants in outdoor containers and baskets, they may require more frequent waterings than they would in the yard or garden.