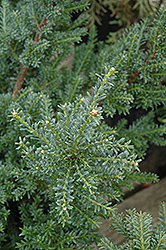 This is a showy more prostrate evergreen shrub with stunning red new growth atop the older dark green needles; changes to a coppery red in late fall; adds a wonderful texture to a border or rock garden

Red Tip Alpine Plum Yew has attractive bluish-green foliage which emerges red in spring. The small needles are highly ornamental and remain bluish-green throughout the winter. Neither the flowers nor the fruit are ornamentally significant.

Red Tip Alpine Plum Yew is a multi-stemmed evergreen shrub with a mounded form. Its relatively fine texture sets it apart from other landscape plants with less refined foliage.

This is a relatively low maintenance shrub, and can be pruned at anytime. It has no significant negative characteristics.

Red Tip Alpine Plum Yew will grow to be about 4 feet tall at maturity, with a spread of 3 feet. It has a low canopy. It grows at a slow rate, and under ideal conditions can be expected to live for approximately 30 years.

This shrub should only be grown in full sunlight. It does best in average to evenly moist conditions, but will not tolerate standing water. It is not particular as to soil type or pH. It is somewhat tolerant of urban pollution. This is a selected variety of a species not originally from North America.