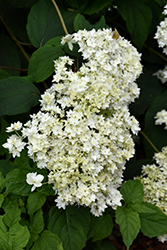 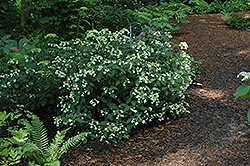 A beautiful selection with flowers that first open as white lacecaps, then the outer florets double creating a starburst effect; best if treated like a perennial and pruned to a few inches from the ground in spring, blooms on new growth

Hayes Starburst Hydrangea features bold clusters of white flowers with creamy white overtones at the ends of the branches from early to late summer. The flowers are excellent for cutting. It has forest green foliage throughout the season. The heart-shaped leaves do not develop any appreciable fall colour. The fruit is not ornamentally significant.

Hayes Starburst Hydrangea is a multi-stemmed deciduous shrub with a more or less rounded form. Its strikingly bold and coarse texture can be very effective in a balanced landscape composition.

This shrub will require occasional maintenance and upkeep, and is best pruned in late winter once the threat of extreme cold has passed. It has no significant negative characteristics.

Hayes Starburst Hydrangea is recommended for the following landscape applications;

Hayes Starburst Hydrangea will grow to be about 4 feet tall at maturity, with a spread of 4 feet. It tends to be a little leggy, with a typical clearance of 1 foot from the ground. It grows at a fast rate, and under ideal conditions can be expected to live for approximately 20 years.

This shrub does best in full sun to partial shade. It does best in average to evenly moist conditions, but will not tolerate standing water. It is not particular as to soil type or pH. It is highly tolerant of urban pollution and will even thrive in inner city environments. Consider applying a thick mulch around the root zone in winter to protect it in exposed locations or colder microclimates. This is a selection of a native North American species.